Top 5 Samsung Phones
Find out the best phones from Samsung

Here are our Top 5 picks for the best cell phones that Samsung offers in 2020... 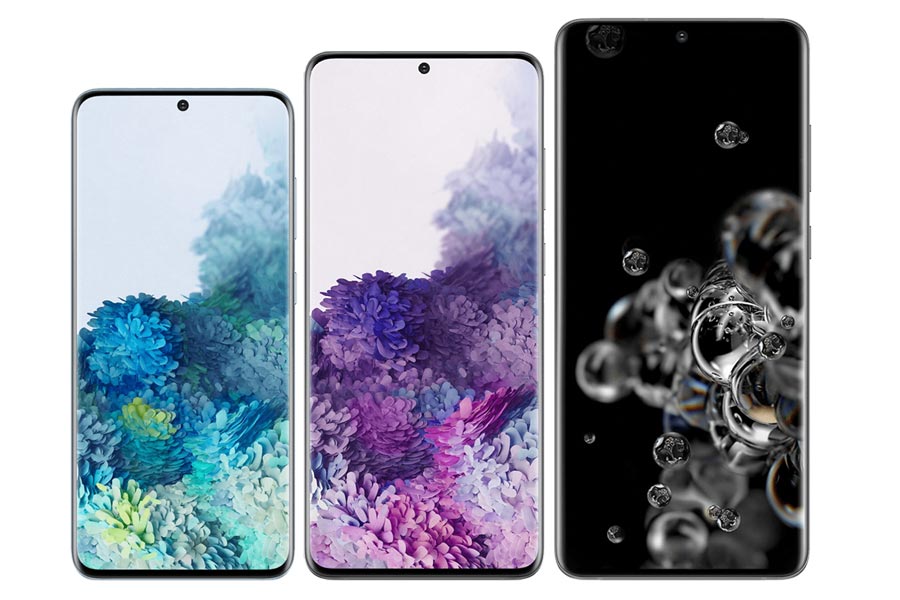 The release of the new S20 series is here, and there are 4 new phones to marvel at. The S20, S20+, S20 Ultra and the Z Flip. Samsung have upgraded pretty much everything that matters this year, from the display to the camera and battery. The S20 series does not disappoint.

The S20 and S20+ are excellent propositions for those looking to upgrade their cell. The displays are improved and are now the best phone displays on the market. The new 120hz screens offer the smoothest experience on a smartphone; scrolling your facebook feed is now fluid like you've never seen before. Samsung claims the cameras are the biggest upgrade to their Galaxy series since the S7 series in 2016, a major bump up in quality. Whether you're an amateur or a professional photographer, you will get great results from the S20 series.

All the specs are there: 12GB of RAM, 128GB of storage as a minimum(with a microSD slot for more), a 4000mAh battery and importantly a 5G radio, letting you get the fastest download speeds from your cellular network. The S20 and S20+ are pretty much everything you could want in a compact smartphone.

... and then there's the S20 Ultra. If you're looking for the most powerful android phone - with incredible features and specs then look no further. A bigger, stunning 6.9-inch screen, up to 16GB of RAM, 512GB of storage and a gigantic 5000mAh battery so you won't be constantly looking for a charger - the S20 Ultra lives up to its name.

The camera features an insane zoom, so you'll never miss a shot because you couldn't get close enough. Samsung are calling this feature "Space Zoom" and it's not the only new feature for the camera, you can also capture 8K video. Don't settle for anything but the Ultra if you want the best of the best.

Another curve ball from Samsung this year, the Z Flip follows up last year's Galaxy Fold but from a new angle, literally. Last year's Fold had a flexible screen that folded vertically, opening the phone out revealed a new tablet-like format. This year, Samsung are trying a more compact route, offering the Z Flip that folds in half horizontally, like a clam-shell. Coming only 5 months after the re-release of the Galaxy Fold, it seems consumers still aren't sure about this new wave of foldable phones. Still, the novelty is there and Samsung are pushing boundaries with this new tech. If you want something a little more unique but still feature packed, check out the Z Flip.

If you are already a fan of Samsung phones, you are probably familiar with the excitement that has surrounded the release of the Samsung 10 range. These new devices are certainly some of the best smartphones on the market.

The Samsung Galaxy S10 is a top quality phone and it's release presented a great way for Samsung to celebrate the 10th anniversary of its S series. However, the phone's quality does come at a considerable financial cost. So, what can you expect for the price?

The Samsung Galaxy S10 features a triple-lens rear-facing camera. This gives the user and opportunity to take regular, telephoto and ultrawide photos. The new ultrawide feature is especially impressive. Other phones have this wide angle feature but they do not have the same excellent low light performance as Samsung devices.

The new 6.1-inch 19:9 Super AMOLED display on the S10 provides exceptional color accuracy. The other stand-out feature of the display on this phone is the Infinity-O display design. This means that the traditional notch you can find at the top of many smartphones is replaced by a hole at the top right which is produced using a laser. This seems to be a popular change with many users.

The new punch hole display feature is one of the design changes that have emerged in the Samsung Galaxy S10. There is also an in-screen fingerprint sensor. The design features all help to create the stand-out 93.1% screen-to-body ratio that the device has.

Despite the larger screen size of this phone, it still has impressive battery life. This is due to the 3,400mAh battery which is an upgrade on the 3,000mAh battery in the Galaxy S9.

As with the S10, the S10 Plus has a seriously impressive camera. It's triple-lens and rear facing, with each lens being 12.3MP. This enables the taking of regular, telephoto and ultra-wide photos. There are also some cool 'Live Focus' filters to experiment with.

If you choose the High-end 512GB/1TB version of this phone, you can opt for a premium ceramic back. This is a pretty impressive design feature. You will also notice that this phone comes with a headphone jack as standard.

The 4,100mAh battery in the Samsung Galaxy S10 Plus certainly packs a punch. You can easily get 24 hours of battery life from one charge.

There are two rear facing cameras with this phone. This means that this device does pretty much what the high end devices in the series do, minus the telephoto option. You need to decide how vital this is to you.

The display on the Samsung S10e is a little smaller than others in the range, at 5.8-inch. However, this AMOLED display still provides the crisp and clear images that Samsung devices are known for. You also get to use the Vivid Mode feature to tweak the shade of your view. Like the other devices in the range, the Samsung Galaxy S10e features the ‘Infinity-O’ display.

Outwardly, the S10e looks just like a smaller version of the pricier models in the range. However, one subtle difference is that the Infinity Edge design that is included in the other devices in the range is not present in this phone. This means that the screen is flat and the bezels are more noticeable. The in-screen fingerprint scanner is not present in this phone either, but it does have a biometric fingerprint pad on the reverse.

The 3,100mAh battery that comes with this phone is more than capable of providing 24 hours of life on a single charge, based on average usage.

This is quite simply Samsung's top of the range phone, the only downside is the price tag. One of the big advantages of the Samsung Galaxy Note 10 us that it's a lot easier to hold than previous Note versions. It also has a full HD display. Do these advantages make buying the phone a good idea?

In truth, the camera on the Samsung Galaxy Note 10 is not much of an upgrade to the ones on the S10 and the S10 Plus. That being said, it's an impressive camera with triples lenses that are rear facing. This means that the Note 10 is not the best camera phone on the market but it's still pretty impressive.

The Note 10 has the same type of Infinity-O display as the devices in the S10 range but the cut-out for the front facing camera is not at the top right hand side of the phone; it's at the top in the centre. The AMOLED display is still edge to edge though. It's also 6.3-inch in size and features full HD.

The biggest design difference between previous Notes and this one is that it feels smaller to handle. However, it can still be a little difficult to handle for users with small hands. The fact that the Samsung Galaxy Note 10 is smaller, lighter and thinner than previous versions is an advantage to many though.

The decision to put a 3,500mAh battery in the Samsung Galaxy Note 10 is perhaps a surprise. That being said, it's still powerful enough to provide 24 hours of life from one charge with normal usage.

Overall, the Samsung Galaxy S10 Plus and Samsung Galaxy S10e seem to represent the best value in this range. This is because the Samsung Galaxy S10 comes with a high price tag. If you are going to invest this amount of money, you may as well spend just a little more to get the higher end S10 Plus. On the other hand, if buying an S10 is too stretching for your budget, you can get all of the essential features in an S10e.